Margaret Carsello Chiappetta,
Lecturer at the School of the Art Institute of Chicago

In the mid 1960’s, Chicago was an incubator for an iconoclastic group of young artist collectively made up of six School of the Art Institute graduates: Jim Falconer, Art Green, Gladys Nilsson, Jim Nutt, Karl Wirsum, and Suellen Rocca. As recent graduates, they decided to join forces and exhibit together in the mid-1960s. They had exhibited together in a larger group show at the Hyde Park Art Center and decided to organize and exhibit together in smaller venues under the name Hairy Who. Transcending the limits of the Chicago story and art scene at the time, they injected their new radical vocabularies and unconventional voices showcasing Chicago in a new national and international profile in the art world.

Hairy Who? was a response to a moment in time, coming out of an age during a period of national upheaval that witnessed the escalation of a rising counterculture, tumultuous racial and gender relations, and the expansion of a capitalist consumer economy. There is a lot of play and fun in these works, while at the same they are provoking, confrontational, and aggressive in a direct way. The thread of humor and spontaneity is complimented with bold graphics, charactures, wordplay and puns. Somewhat ambiguous, provocative, but also strategic, the work transmits a graphic style that has progressive ideas, and challenges notions of gender, overt sexuality, social mores of the time, standards of beauty, and consumer culture.

Each artist manipulated source material collected from everyday life—including consumer culture, advertisements, comics, posters, and sales catalogs. Drawing from similar sources, they all developed their own style and visual language that stands on its own, while complimenting each others works in the group. 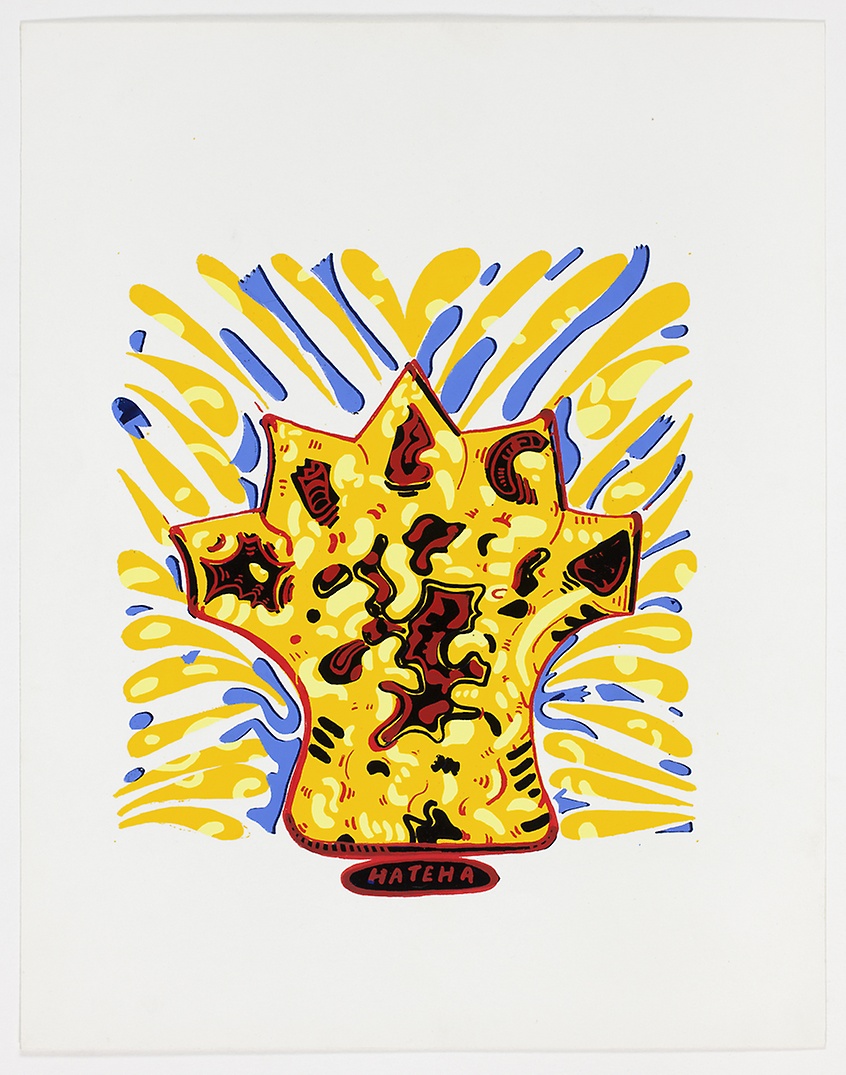 James Falconer has described his Hairy Who–era work as “punk rock.” His compositions and imagery express an anti-formalism with expressive and forcefully articulated graphic forms. 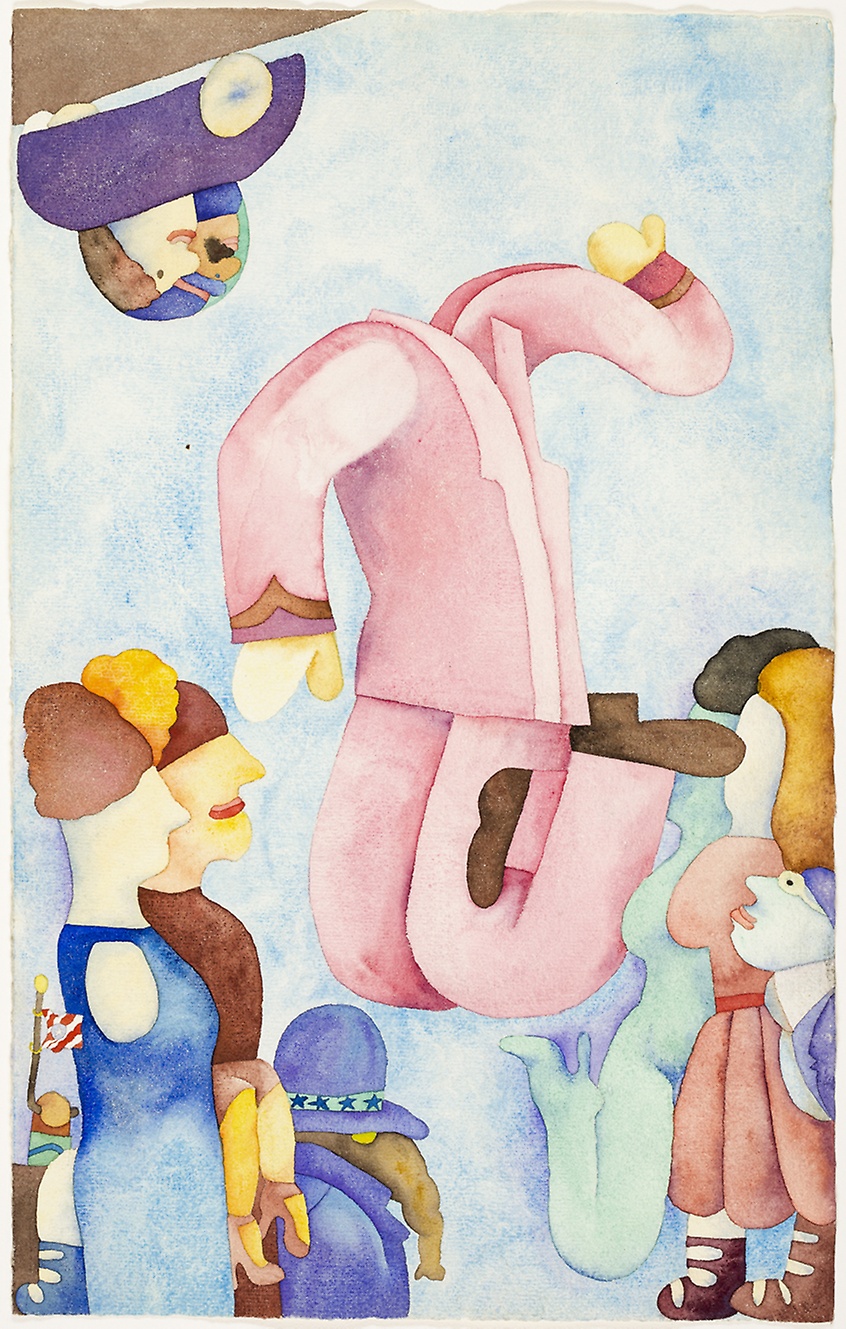 Gladys Nilsson primarily works in watercolor are derived from her own observation with a playful and humorous approach. Her mischievous subjects engage in disguise, voyeurism, and a complex web of interactions.

Art Green collected reference materials including commercial signage, postcards, and magazine advertisements. His drawings, paintings, and prints. are pre-Photoshop complex compositions with layered depth of flat planes of color and volume characterized by a graphic sensibility drawn from popular culture. 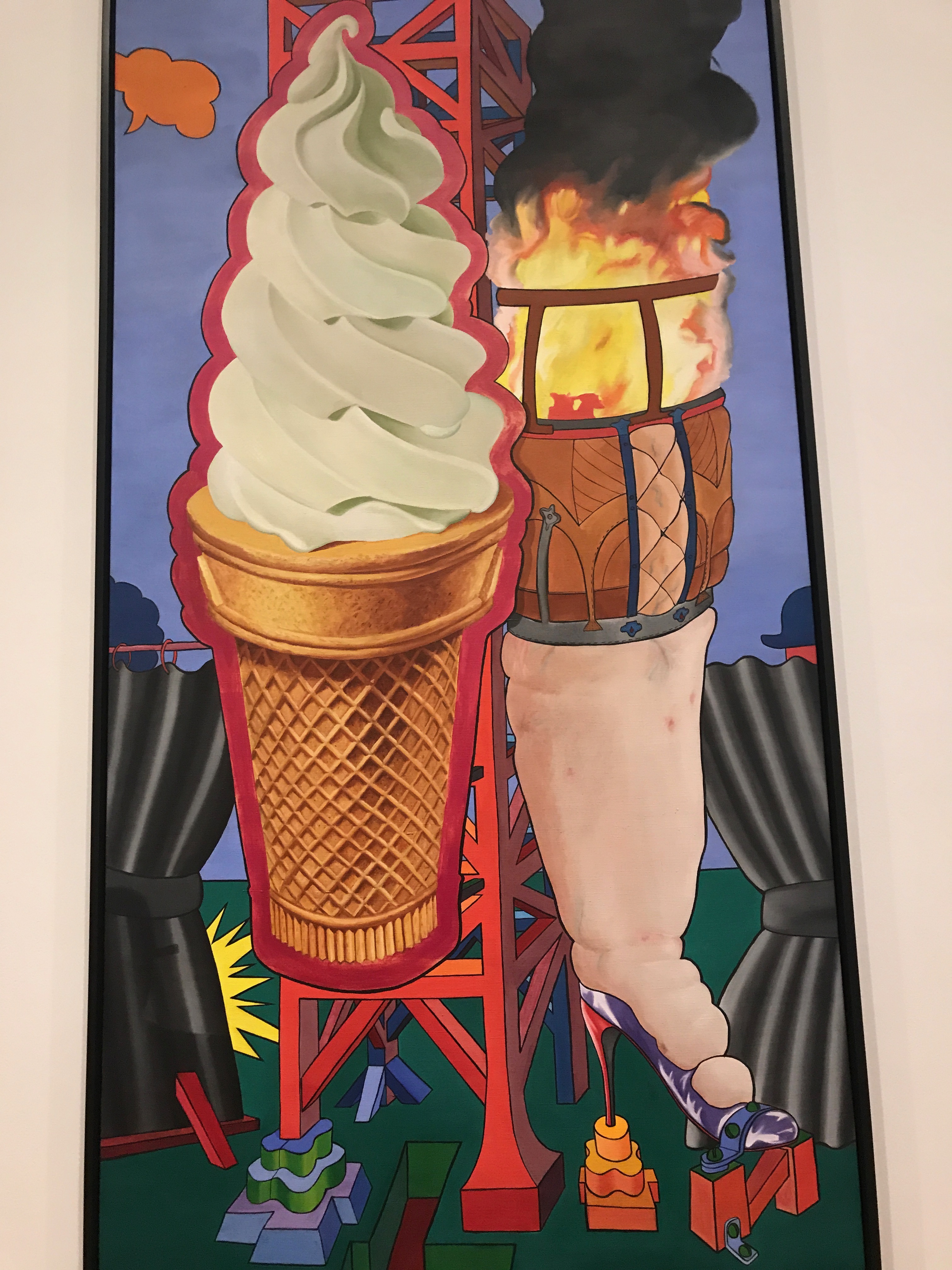 Much of Jim Nutt’s works are portraits that embody both a sense of stability and lunacy. Several were painted on the reverse side of Plexiglas inspired by the jukeboxes and pinball machines of the 1950s and ’60s. 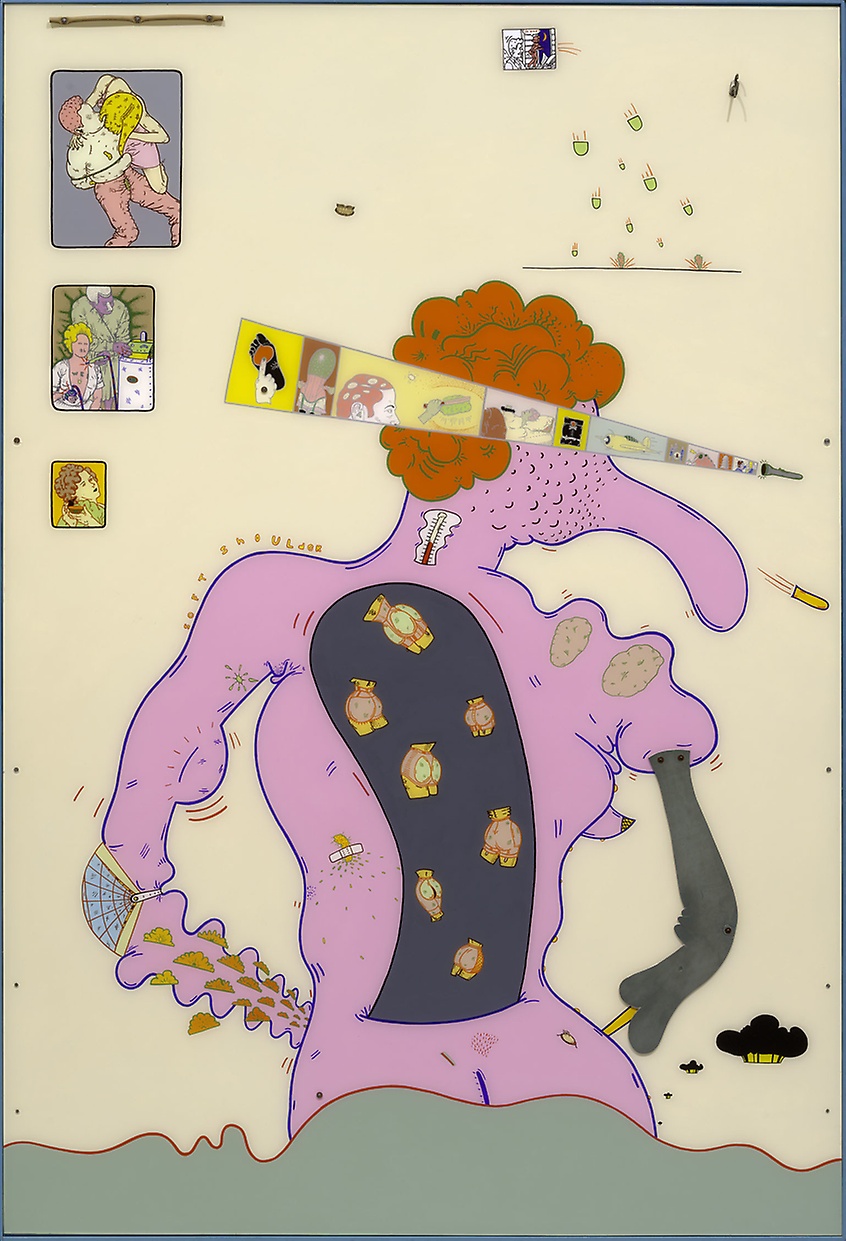 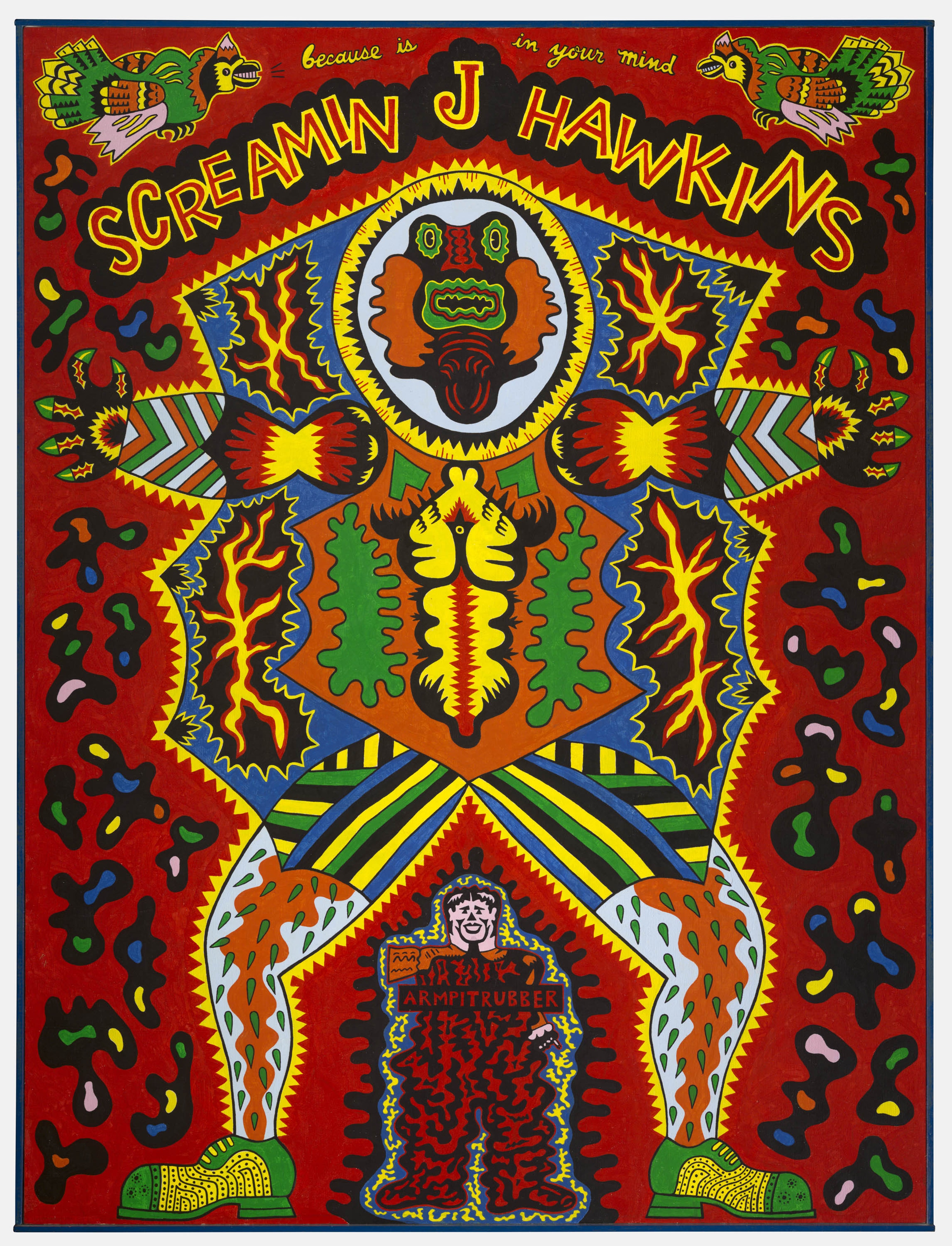 At the time of the group’s first exhibition Karl Wirsum had already established a sophisticated, original style Inspired largely by comic book figures and popular icons. This iconic image of rock and roller Jay Hawkins epitomizes this style which combines a graphic sensibility of vivid, flat colors, bold outlines, and simplified, cartoonlike figures all with a quirky sense of humor. 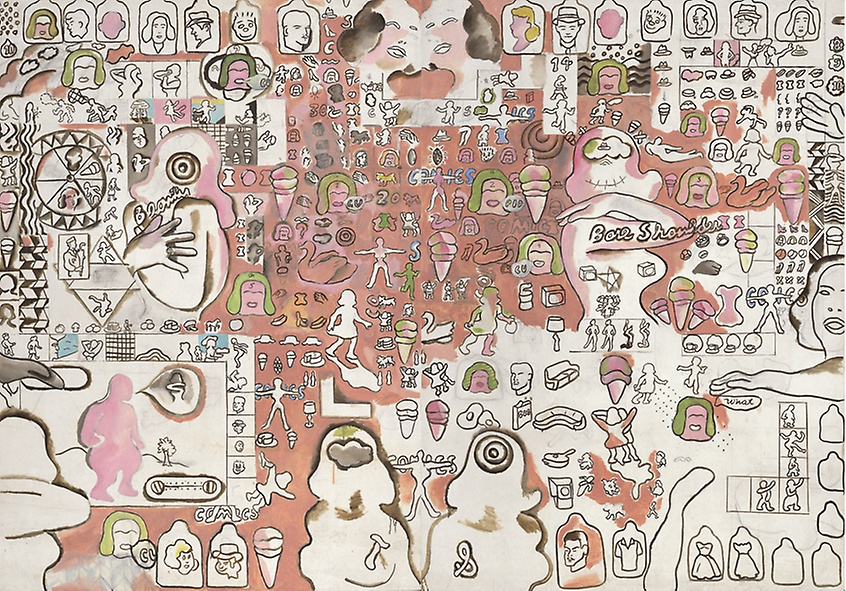 During the Hairy Who years, Sullen Rocca’s visual vocabulary expressed her experiences as a newlywed and young mother. Her drawings and paintings are often arranged with repetitive imagery and patterns and are cultural icons referring to beauty, romance and the promised happiness to young women of the generation.

The Art Institute of Chicago has organized a comprehensive exhibition of the Hairy Who artist group on display through Jan 6, 2019. This is the first-ever major survey exhibition dedicated solely to these groundbreaking artists and works. The show is extensive with first floor galleries exhibiting prints and drawings and the second floor galleries featuring an array of works in painting, drawing and experimental surfaces.
The show gives an encyclopedic look at the raucous, graphic, comic book, and urban culture of which inspired original work. Over a period of four years between 1966-1969 the artist group created a staggering amount of work determined on gaining attention of which they did with great success, influencing generations of artists and art movements across the world- from graphic designers to illustrators to contemporary artists and beyond.