THE INS AND OUTS OF SHOPPING IN CHINA; AN EXPAT EXPERIENCE

Gary Chiappetta, Chief Executive Officer
September 19, 2016
I am currently spending a few months in China as part of an exploratory market and cultural audit for our business. The best way to understand packaging and the consumer experience in another country is to live there. Fortuitously, my wife had a business assignment in Beijing, so off we went to live and experience life in China. Among our many discoveries is that shopping can be tricky and experiences vary depending on what part of the city you live in or what subway stop you happen to be near at any given time. And picking up a few items for your hotel refrigerator is very different than doing the week’s grocery shopping for the family.

In China, Beijing specifically, you’ll find many different types of offerings within the hypermarket category, like Carrefour, Walmart, and Wu Mart, China’s answer to the Walmart model. Both Wumart and Walmart sell almost everything from bikes and appliances to fresh and packaged foods, but the number of SKUs will vary significantly depending on location and size of the store. Although Walmart has a bigger selection of grocery products than WuMart, there are far more WuMart stores throughout the city. And Carrefour is the place to shop for the chinese equivalent of almost anything you need. Still, the least expensive and freshest foods are found in local farmers markets and small street markets off most major roads.

Chinese Supermarkets include chains like Chaoshifa and Jinkelo, popular with Chinese Nationals, that can be found around the city center but not necessarily in the “suburbs” which, for us, is about 35 minutes from downtown via the the subway. In many cases, Western products are few and far between, especially dairy products such as margarine, cream (a must for Western coffee and tea drinkers) and cereals. However, If you are looking for import foods from Europe or America, there are retailers like Jenny’s Lous and April Gourmet, but these stores are only found in the Eastern part of the city where there are a lot of expatriates working for the embassies, finance and other business sectors. Although these areas are beautiful and feel more like home, they lack a real sense of being in mainland China.

DECIDING WHERE TO SHOP

The biggest factor in deciding where to shop is going to depend on location. Taking a subway 1-2 hours each way to the grocery shop is maddening, especially if you get caught up in the underground rush hour. Walmart is not very convenient for me since it’s an 8 stop, overcrowded bus ride. I once took the bus carrying a couple big bags filled with grocery and bath products – plus three air purifiers. People riding the bus are not very acommodating and the bus does not wait for you to properly unload. In other words, you’d better be quick about it. So if you don’t own a car or any one of the infinite number of two-wheeled vehicles clogging the streets, shopping is limited to a 20-30 minute radius for walking convenience. This also means smaller grocery lists and more trips to the store. And because people are either walking or riding a moped, and there is a fee for plastic bags, many brands have built-in handles. At the end of the day, however, your best friend is still the old person two-wheeled cart. 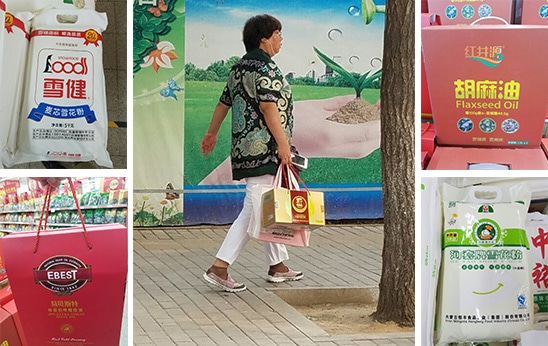 Regardless of where you shop, how often or how you get there, the shopping experience differs from store to store—whether it’s navigating the aisles, merchandising and selection. Most people I have spoken to tend to go to the same two or three stores because they know the layout. What I found interesting is the consistency in organized chaos. Because hundreds of people shop at the same time, most retail layouts are on multiple levels, and frozen can even be in the front of the store, which means your ice cream is oftentimes soft serve before you leave the store. And product is everywhere, including the escalator rides up and down. 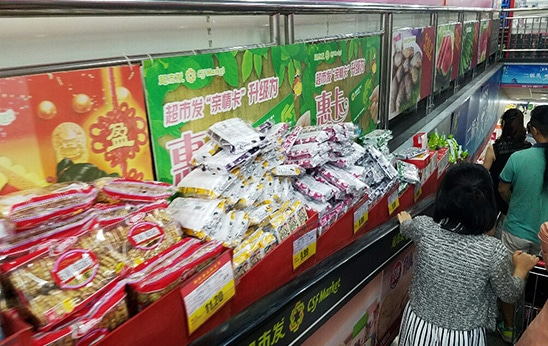 In regards to merchandising, the most effective brand presentations were the ones that have their own stand-alone merchandisers, fixed and pop-up. Brands such as Lays, Mars, Dove and Ferrero Roccher have arresting displays that are a nice disruption from the mayhem. All of these brands can be seen from most parts of the store and are positioned near end-caps or near the check out.

The best brand presentations were the ones with their own stand-alone merchandisers.

My own personal experience has netted out to managing my shopping similar to the few expats that live in our district, much like that of the Chinese Nationals. We bring our two-wheeled cart and some large reusable IKEA bags to the grocery store. We have also found that you cannot go to the market without a list, something we rarely did stateside. Because you are basically limited to what you can carry and are most likely walking, the idea is to avoid additional trips because you forgot an essential like toilet paper.

A big difference between us Westerners and Chinese Nationals is that they do a lot of chopping, frying, steaming and cooking in a wok. Many apartments such as ours do not have an oven. So our purchases are limited to our experience for prepping and cooking on a burner, similar to our habits at home. As time goes on, I am sure we will be adjusting to the Chinese Nationals’ style and thus influencing our shopping behaviors and purchases. Or I will go back to that bloody WalMart (on the bus) and pick up a plug-in convection oven that fits on the countertop!