NUTRITION FACTS DELAYED:
WHY UPDATING IS STILL A GREAT STRATEGY

Mike Gondek, Design Implementation Artist
August 25th, 2017
Manufacturers of food products sold in the USA are running down their existing printed stock in preparation for the mandatory labeling update. As they will need to reprint their packaging, this is an excellent time to reformulate ingredients and to update brand design. On June 13, 2017, the FDA announced the compliance date for the Nutrition Facts Label will be extended. The new FDA commissioner Dr. Scott Gottlieb intention is to unify FDA & USDA updates, reducing costs to the manufacturer and confusion to the consumer. There is also a lack of detail on some finer issues for added sugars and dietary fiber that has not been finalized. An alliance of 17 major food industry groups suggested adding 3 more years to the current 2018 deadline. Though 2021 could now be the new deadline, there are advantages to updating as soon as possible.

Important issues to consider prior to updating:

One cannot insert the same values from an existing nutrition facts panel into the new format. In addition to stringent typographical changes, the FDA has changed the actual recommended values of nutrients. At Kaleidoscope we confirm the nutritionals submitted to us have been updated to ensure the panel is compliant with the new FDA update.

The total amount of fats consumed daily for example has actually increased by 20% on the new nutrition facts panel. For many years we have been told fats are unhealthy, and we switched to low fat food. The problem is that we cut back on healthy fats along with the harmful ones. Fats are a major source of energy and helps you absorb vitamins and minerals. 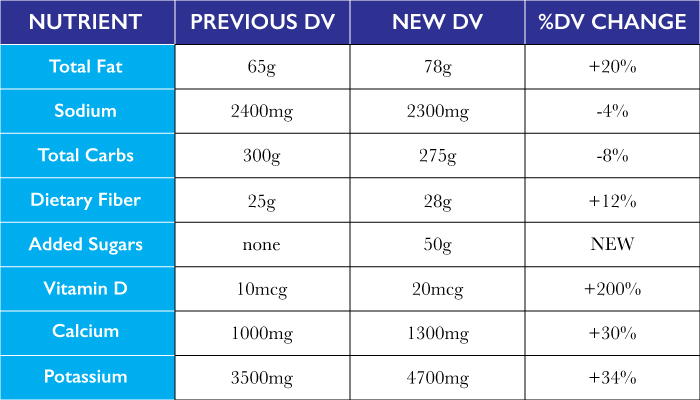 The reference amount customarily consumed (RACC) determines the serving size. Manufacturers often feel more comfortable using the word “about” X servings so they are not accused of overstating their servings per package. The truth is, the FDA prefers to not use “about” as the serving size is rounded and instead prefer consumer confidence in the nutritional panel. The FDA has removed the word “about” in all their examples and also use consumer friendly household measures such as cup or slice, as preferred by the FDA.

Products packaged in a form that promotes consumption in one sitting are required to be labeled as one serving (eg: 20oz soda bottle). Products that contain greater than twice the RACC but less than or equal to three times the RACC are required to list both the per serving and package in a dual column format. Serving sizes have been updated to better reflect what people actually consume in one sitting. Most products remain the same, but these have also been updated. 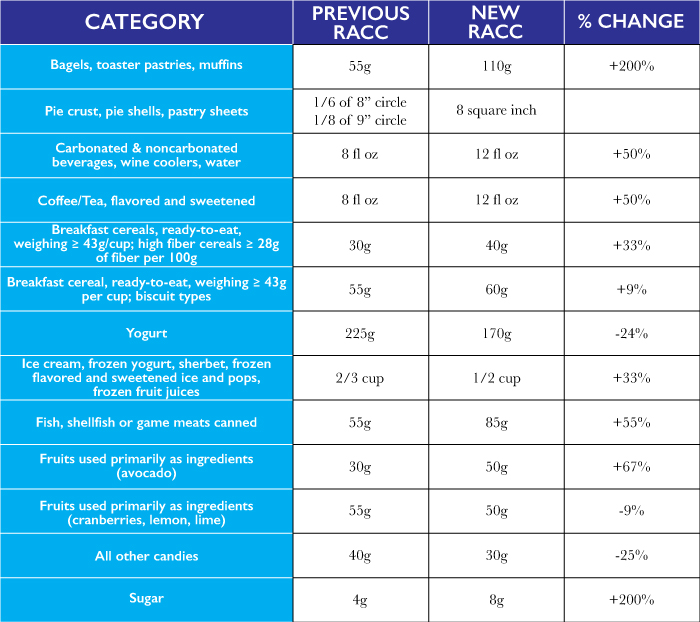 Nutritional labeling of alcohol has been banned up until 2013. Since the BATF split and the TTB took over liquor labeling, they have been proactive and providing us better labeling guidelines.

The nutrition facts now require the daily value percentage of added sugars on the label, and this will eventually bring about a harsh reality to consumers about their eating habits. Package sizes affect how people eat—Per container values will now additionally need to be added in a dual column format when the package size is between one and two servings. A 20oz bottle of cola or a pint of ice cream could shockingly be over 100% the daily value to total sugars.

The fast food industry is especially guilty of too much sugar, sodium and few vegetables.  At Kaleidoscope, we have already updated many labels to the new format, but understandably no requests have come for items high in sugars such as cookies and ice cream. Consumers though need the truth to make better choices, and this will drive better options for brands to evolve. People will likely continue to sugar consumption beyond the daily value, but updating to the new nutrition panel will likely change some habits.

The labeling of whether a product contains GE ingredients, is assigned to the USDA, and will soon become a topic of much debate as there are numerous problems with labeling GE.

The first being that no effects on human health have been shown as a result of the consumption of genetically engineered foods. Many studies have been performed on GE, most with the intention of discrediting usage.

Secondly, the concern is in how accurate GE labeling will actually be. GE labeling for the most part will attempt to target substances that have been modified using recombinant in vitro DNA techniques. Cross pollination, modifications made by nature, logistics, and record keeping make identifying everything that is GE difficult. Our vegetable oils often come from GE soybeans, and the USDA is unsure if that will need to be disclosed,. This is only one amongst many other related issues that need addressing.

Thirdly, GE labeling is a cost that ultimately will likely be passed onto the consumer. The consumer has a right to know that the price of products may go up to pay for expensive GMO certifications and the manufacturers cost of relabeling.

Kaleidoscope is the firm where strategists, designers, and makers work together to not just develop ideas, but build them—conceptually and physically. And it starts with an immersive understanding of your business challenges, objectives and consumer POV. Experience it for yourself.
Get In Touch