While I am not an expert on sustainability, I am someone that loves the outdoors and respects our planet, so I would consider myself a want-to-be environmentalist. Am I perfect, meaning, do I have the lowest carbon footprint possible? The answer is no, but I am always looking for ways to live more responsibly, whether it’s reducing my consumption of fossil fuel, composting my food waste, recycling used packaging, or finding ways to reuse or restore things that would normally end up in a landfill.

Although these incremental, daily choices are helpful, the real opportunity to reverse the effects of industrialized consumerism lies at the corporate level. Responsible manufacturing can make a significant impact on developing sustainable solutions that protect our environment. In fact, it is a consumer expectation that corporations take the lead on eco-friendly initiatives. 64% of consumers and 56% of consumers polled in a Mintel report cite that food/beverage manufacturers (e.g., Coca Cola, Kellogg’s) and packaging manufacturers, respectively, are responsible for making environmentally friendly choices.

“Who do you believe is responsible for environmentally friendly food/ beverage choices? Please select all that apply.”

I saw this data in action at the Outdoor Retailer (OR) show in Denver, Colorado, in January 2020. The OR show happens twice each year, once in the summer and again in the winter. Each seasonal show hosts hundreds of manufacturers in what the Outdoor Industry Association (OIA) touts as “the largest global trade event serving the outdoor industry.” These companies have an obvious vested interested in protecting the environment, especially public because it is the “playground” of their brand loyalists: Backpackers, bikers, campers, climbers, fisherman, hikers, kayakers, runners, skiers, anyone and everyone that participates in an activity that takes place outdoors. And because most manufacturers at the OR show employ like-minded individuals who want to protect the world around them, there is a lot of effort being made to restore, reduce, reuse, and recycle.

A major focus at the OR show was around reducing or eliminating single-use plastics that choke landfills, oceans, and streams. This problem is pervasive globally because single-use plastic bottles are convenient for poorer countries where access to clean water is difficult and among wealthier societies where single-use brands like Evian are used as status symbols. In the United States, Americans alone throw away 35 billion plastic bottles annually according to the Recycling Coalition of Utah (RCU). Unfortunately, only 25% of those actually get recycled and those that end up in landfills take over 1000 years to degrade. However, an average person can eliminate the need for 100 disposable bottles per year by using reusable drink containers (RCU).

With this in mind, many manufacturers showcased their solutions for the plastic problem. Brands like Yeti, Stanley, Hydro Flask, Brümate, Klean Kanteen, EcoVessel, Tru Flask, and Tervis manufacture single- and double- wall insulated hydration alternatives to plastic bottles. They are responsibly manufactured with a focus on reuse, portability, and design so they can provide more versatility than plastic. Another company, Vestergaard, whose tagline is “doing good is good business,” developed a mesh to remove Guinea worm larvae from drinking water in 1994, resulting in the evolution of LifeStraw technology that turns dirty water into safe drinking water. In all cases, these brands are helping to reduce plastic, reduce carbon emissions, and save the planet by recognizing their impact on the environment (and their bottom line). 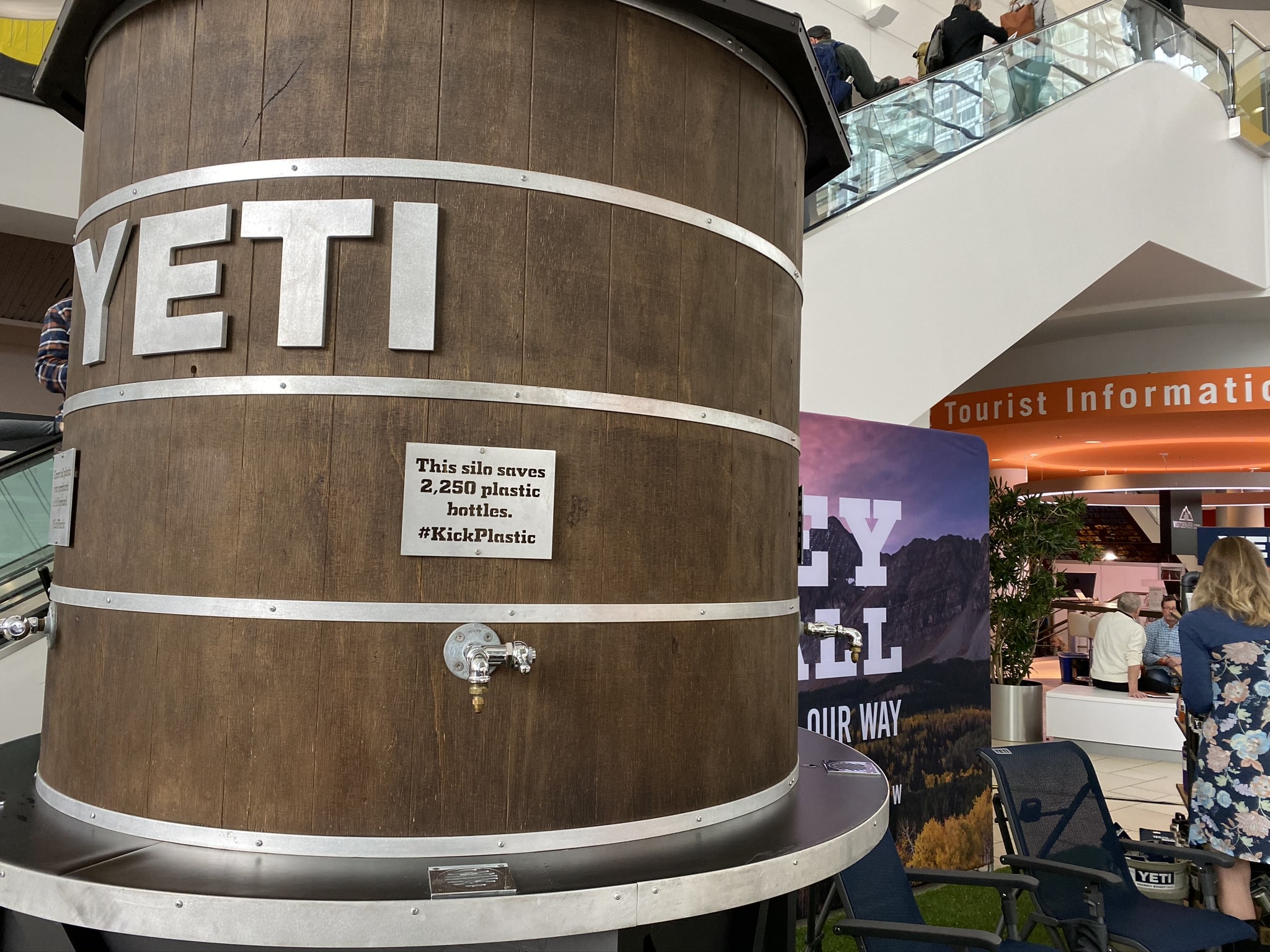 But hardgoods companies like the ones I mentioned are not the only manufacturers I met at the OR show. One standout is a company called United by Blue that maintains a healthy balance between purpose and profit. A Certified B Corporation, United by Blue has a core philosophy that is rooted in building community to help clean up the plastic in our waterways; generate less waste by responsibly manufacturing reusable products; and creating soft goods (like handbags and backpacks) from recycled single-use plastic bags and bottles. More specifically, strong ply fibers are created from plastic that is collected, cleaned, chopped, and “flaked” before being melted into chips and spun into a synthetic yarn for United by Blue products. They also make a line of flannel products from recycled polyester (plastic water bottles), biodegradable but durable buttons, and organic dyes that are . I encourage our readers to check out their website (https://unitedbyblue.com/), where you will learn more about their vision, mission, and philosophy. United by Blue does not appear to be an opportunistic brand trying to capitalize on a trend; instead, this company seems to be setting the standards of sustainable practices and responsible capitalism. 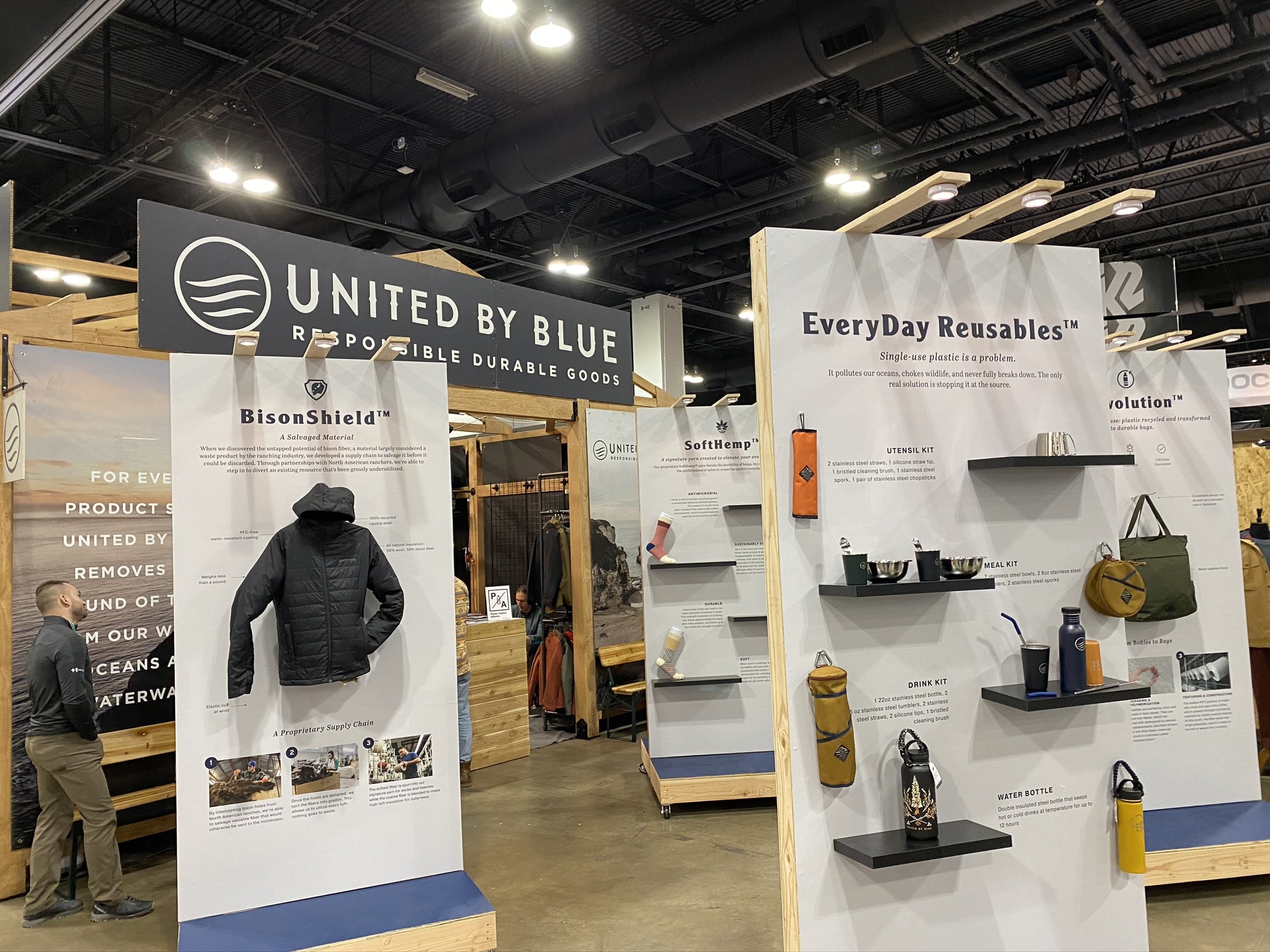 To conclude, brands like Patagonia and United by Blue are true to their mission, and that commitment is the reason to believe in their products. Sure, the products cost more because you are pulling cash from your wallet and there is a direct impact your bottom line. But what about the larger cost of pollution and the impact on our animals, planet, and food sources? There is a lot of for consumer-facing brands to be more responsible, transparent, and do their part in building a sustainable world. However, that mission needs to be at the brand’s core and evident in their brand voice. For those companies that have been around to revolutionize the industrial era in America, that commitment needs to be evolutionary with a grassroots approach to change. And yes, we are here to help.